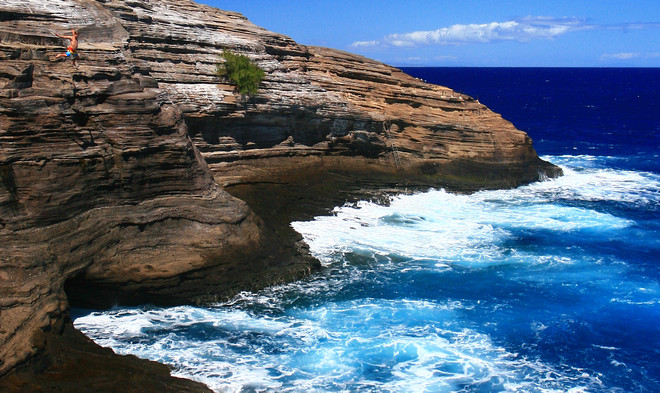 I am relatively new to this art.

I studied the sciences for most of my life and didn't consider art as "worthy". I only bought my first camera (a piddly Canon A40) because I moved to the Big Island of Hawai`i and wanted to share my experiences with friends and family back home in Tennessee. One day, my camera was knocked into a different mode, and upon comparison with the images that I had previously taken, these new images looked more realistic and natural. I realized at that moment that I was not a photographer, but rather a point-and-shooter. I vowed to myself to learn how to use my camera properly to better capture the world around me.

Flash-forward three years: I live on O`ahu, I own my first DSLR and legitimate gear, and have finally learned how to use my camera to capture what I see. I spent two years hiking and camping throughout the islands, improving my skills. I then had the pleasure of traveling to Costa Rica and Nicaragua for four months for photography before returning to O`ahu. Since that time, I have resided in Honolulu, traveling throughout the islands in search of pristine nature and incredible light.

Based on my past experience with my first camera, I realized that anyone can take a picture, but a photographer is someone who will either attempt to be in the places no one else has been before, or will create a moving image that is different from any image captured by any other person who has ever been in that exact same location. Photographers do this by utilizing their perspective, their equipment, their creativity, or a combination of the three. My goal has been to present the natural world in which we exist as uniquely as I can.

All digital photographers, amateur or professional, use software to produce a final product. However, there is a fine line between digital photography and digital art. Purists will say that a final image is created 90% in-camera through the use of filters and manipulating the "Golden Triangle", namely ISO, aperture, and exposure, and 10% post-production using classic tools such as dodging, burning, and cropping. Modernists will push these percentages to achieve the final image, while still forced to adhere to the principles of the Golden Triangle. Digital artists will push them even further. I believe that at some point, when more time is spent manipulating an image and creating the final product rather than retaining what was captured in-camera, such an image is more digital art than digital photography.

Nature has done an incredible job being itself, and to mar what nature has created with unnecessary processing just to achieve something "worthy" is not my style. I attempt to recreate what I saw with my eye while I was in the moment.

I won't lie: I have digitally altered my images. I have cloned and healed. I have corrected color, tone, and contrast. I have added saturation and vibrance. I have created panoramic images that have to be cropped and warped. But I only do what is necessary to produce what I witnessed. My intention is to mirror the natural world, not to re-create it.